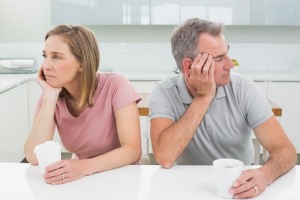 When we commit to a relationship, we usually expect that our partner will reciprocate with roughly the same level of emotional involvement that we put into it. Many of us hope to find a soulmate, a partner who can share and understand our feelings and ways of thinking on an intensely personal level. Others don’t expect such an intense level of involvement and feel more comfortable maintaining personal privacy within a more boundaried relationship. Conflicts may arise when the two partners differ in their expectations of how close they should become. One partner may feel emotionally stranded, feeling abandoned and craving more closeness, while the other partner may feel smothered or pressured into providing more of his or her emotional self than can possibly be given.

The course of a relationship follows a predictable path. The early weeks, months, or even years of a relationship, in fact, are a time of togetherness – when partners search for and experience the similarities that bring them together. It is common for a couple during this first phase to experience a level of emotional sharing so intense that they want to carry their relationship to a more committed level. The next stage, however, is when boundaries are established, when we focus on our differences and in maintaining our own individuality. Couples who can negotiate their way through both of these stages are moving toward a successful long-term commitment. Both of the initial stages typify a good relationship – the coming together phase, followed by the firming up of our own identities within the relationship. A solid relationship is one in which feelings can be readily expressed and shared while each of the partners is able to experience a sense of their own identities.

All too often, however, there is a discrepancy between the two partners in terms of how much of their emotional life they make available to the other. When one partner is able to share emotionally and the other is not, it is usually the emotionally available one who feels more pain. Take the classic example of a couple who have an intense courtship. One partner lavishes the other with flowers, expensive dinners out, and intimate phone calls. Sweetness fills the air and it feels like a dream come true. You have finally met “the one” you had always hoped to meet. But then, almost as quickly as it began, your partner fails to reciprocate when it comes to sharing emotional feelings. Dating comes to a stop, voicemail messages are not answered, and it’s over. There is no fight. There is no discussion about why things are coming to an end.

After you accept that it’s over, you struggle to make sense of the relationship and notice that the focus was always on you, and that’s why it felt so good. In fact, your partner knew a great deal about you, but you knew virtually nothing about him or her. You confused flattery and attention with emotional involvement. You may finally realize that your partner was unable to connect with you or anyone on an emotional level. He or she was an expert at luring people in, but had no ability to sustain an emotionally available relationship over time. It is a painful ride, but you can learn a valuable lesson from it – that relationships entail reciprocal self-disclosure and sharing. The next time, you’ll have the wisdom to know this before being drawn in.

There are many other examples of partners who are emotionally unavailable. Consider a few of them –

WE ARE AVAILABLE TO YOU